Christopher Howard - The Academy of Wealth and Achievement

Christopher Howard is an author, trainer, and entrepreneur in teachings of achievement and prosperity. His books, seminars, and products have generated well over 100 million dollars in sales globally, and he has personally done a million dollar sales in a single day, over and over and over again. His organizations trained more successful million dollar plus speakers, coaches, and trainers than any other organization over the course of a decade in several countries around the world. He has developed thousands upon thousands of trainers, and amongst them he had chosen 7 who he had taught to actually teach his own content within his own organization, and he had 40 coaches within the company extending his reach. At any given time he had two to three seminars being taught by his internal trainers simultaneously somewhere in the world with thousands upon thousands of people going through his famed FAST TRACK to SUCCESS seminar curriculum.

Chris is the author of a best-selling book titled Turning Passions Into Profits - Three Steps to Wealth and Power. Turning Passions Into Profits provides specific techniques for rapidly closing the gap between where you are today and where you'd like to be tomorrow. In this book, Christopher Howard teaches powerful, innovative tools for modeling and replicating the ultimate success of some of the world's greatest leaders and billionaires. With the ability to select and incorporate some of the traits, strategies, thought patterns, and behaviors of those already achieving results, individuals can plot a course and arrive at a chosen destination quicker than they ever thought possible. It provides concrete tools and strategies to fully understand the governing principles outstanding achievers use to realize their vision. In addition, Turning Passions Into Profits supplies exercises to apply these communication and leadership tools to master these skills-ultimately gaining career, financial, and personal success.


Christopher Howard has achieved extraordinary success as a Social Entrepreneur, Transformational Speaker, Author, Coach and Life-Style and Wealth Strategist in a career spanning over two decades. Chris’ life-long mission has been to put the tools of transformation into the hands of everybody on the planet, and to create worldwide wealth through education and entrepreneurial means. On the entrepreneurial side, his seminars and products have generated well over 100 million dollars in sales globally. He has personally done million dollar sales days, over and over and over again (an accomplishment which is only held by a handful of the very top 1% of speakers in the personal and professional development industry, including the likes of Tony Robbins and T. Harv Eker). One of the most popular speakers in the world, Christopher has spoken in 28 different countries and 57 different cities, often with individual exclusive audiences of thousands. Chris has touched over a million people’s lives through his teachings and programs and is known for both his heart-felt approach to transformation as well as his ability to help people to rapidly transform their businesses and their lives for the better. Chris built the largest personal and professional development presence in Australia, the second largest in the UK (only behind Tony Robbins) and he built the largest NLP (neuro-linguistic programming) training company in the world (with ten times the sales of the nearest competitor) prior to launching off to build his newest effort.

Chris has touched over a million people’s lives through his teachings and programs and is known for both his heart-felt approach to transformation as well as his ability to help people to rapidly transform their businesses and their lives for the better. He built the largest personal and professional development presence in Australia, the second largest in the UK and he built the largest NLP (Neuro-Linguistic Programming) training company in the world (with ten times the sales of the nearest competitor) prior to launching off to build his newest effort Legendary Living.

Chris continues to grow entrepreneurial ventures that further his mission and he has used his professional success as a vehicle for helping to fuel the expansion of world wide wealth in more finite ways as well.

In 2005, Richard Branson and Virgin Unite connected him with Taddy Blecher the founder of CIDA the first free University in South Africa, and Chris brought a group of 40 mentors and coaches to work with over 400 students at the South African Also in 2005 Chris led an expedition deep into the mountains of Peru near Machu Picchu, where they worked hand in hand with the local Huiloq community to build a high school, and fund a library and medical center.

While embarking on a journey through Mongolia, in 2006, Chris had the great opportunity to raise funds to support the efforts of The Lotus Children’s Orphanage where they deal with the very base level of survival of street children. Lotus Children’s Centre currently houses around 100 vulnerable and abused Mongolian children and also takes part in community out-reach projects.

Chris’ companies have been a financial supporter for many years of Inner City Arts in Los Angles, California. Inner-City Arts, widely regarded as one of the nation’s most effective arts education providers, is an oasis of learning, achievement and creativity in the heart of Skid Row, and a vital partner in the work of creating a safer, healthier Los Angeles. Inner-City Arts was created to fuel the dreams of children, especially those living in poverty who may believe dreams are for other children.

Chris has personally raised over 1 million dollars in donations for the continued funding of public radio in the Los Angeles area, and the donation of his educational programs to these efforts have been one of the highest grossing fund raisers for KPFK 90.7FM which is part of the listener-sponsored Pacifica Radio network.

Chris was credited by the managing director of WBAI for keeping them from going out of business during fund drives.

Chris has also raised money and awareness for Friends-International based in Cambodia. Friends International is a leading social enterprise saving lives and building futures of the most marginalized children & youth in South East Asia and across the world. They reach out to over 60,000 at risk children and young people, their families and communities each year supporting them to become productive and functional citizens.

Legendary Living is a global education and event powerhouse that rapidly elevates the quality of your life by immediately increasing your ability to experience, create and contribute wealth on a massive scale. The Legendary Living team is committed to creating worldwide wealth by radically shifting collective consciousness through social entrepreneurial means. In 1994 in a space of necessity-driven inspiration a 24 year-old social revolutionary and workplace misfit, dreamed of a radical re-imagining of both his own life as well as the lives of others.

He thought… What would happen if…. there was state of the art – powerfully entertaining, highly engaging, transformational education, that had the capacity to unleash people’s full potential; and what if it was available in every household on the planet?

What if… no matter who you were, or what background you came from, or what corner of the world you lived in, you had the opportunity to massively transform the quality of your life: physically, emotionally, spiritually and financially? And what if the insights and the knowledge and the skills that you immersed yourself in came directly from the greatest luminaries, thinkers, achievers, activists, financiers, entrepreneurs, and leaders of all time. And what if, cutting-edge technologies enabled you to literally download the information into your mind and body and you could embrace your new life in the blink of an eye.

What if all of this was possible for you and the only thing that you had to supply was your own commitment and desire to live an inspired life – AND what if the transformation could even happen right in your very own living room?!

Christopher Howard intuitively knew that with a future as high-tech as he was contemplating, that our basic human need for connection would prosper by also weaving throughout the education those things that would also make the future of education high-touch. This would call for the inclusion of transformational live events, retreats, educational experiences, philanthropic expeditions and even adventures – to exotic breath-taking locations – where you could enjoy a complete life or business-makeover – experiences that would cause your fulfillment, your peace of mind, your business, your finances, your health and your relationships to instantly begin to flourish and prosper beyond your wildest expectations.

He asked himself the question…

What if there was a revolutionary form of education that would allow everyone on the planet to breakthrough whatever barriers they might have and get whatever transformation, knowledge, and skills they need in order to live their every dream?

He had a dream of the total eradication of poverty of mind, body and spirit and the expansive creation of worldwide wealth.

Christopher began with the end in mind by running some of what were to become the most popular educational programs in the world through his earlier companies and he had the opportunity to touch over a million lives in this way. He ran programs in 28 countries around the world in 57 different cities, often with over 2,000 people in every room and often every weekend in a different city. This was an amazing time in his life, but that model had its limitations: even with 6 other full time trainers, and 40 coaches, the major limitation was time and the ability to service only small portions of the global population at a time. After almost 20 years, it became far too energy consuming – while also not accomplishing the original vision to maximum effect. Christopher realized that there had to be a better way. And at that point, in 2012 he began to regroup and consider a new way to build while getting right back to the original vision in a far more authentic way. Perhaps he had put the cart before the horse.

In 2011, Chris began to help other businesses build million dollar structures underneath them based on his past experience having done so for himself in what was called The Million Dollar Mastermind – while he simultaneously went into a creative mode for a full two years in order to work to pull together all of his life experience in order to create a brand new concept unlike anything the world had ever seen but which would deliver on the promise of his original vision far more than his last company, and it was at this point that he had the emergence of a brand new educational delivery method and structure which would provide for sustainable and global growth, and this was the beginnings of what he was to call Legendary Living. 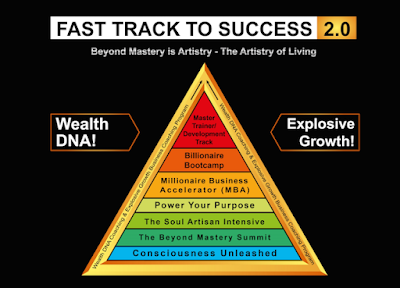 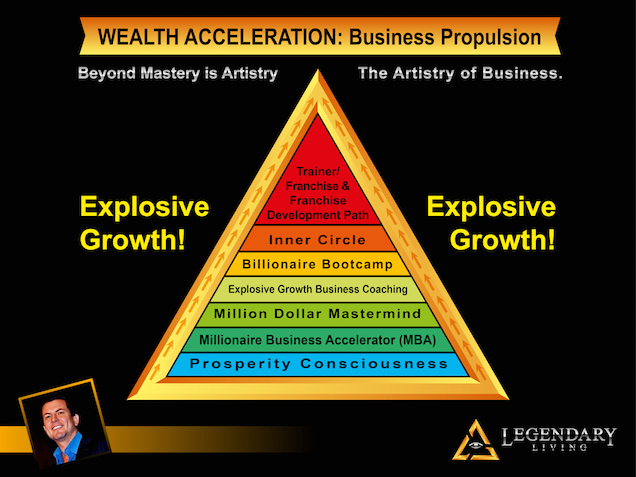 The Academy of Wealth and Achievement

The Academy is a global educational institution for the information age focused on researching and teaching the most advanced mindset, strategies and skills that produce real world results for its students in the acceleration of wealth and personal achievement. With a broad curriculum of live classroom training, experiential courses, individual coaching and mentoring programs, a substantial multimedia platform and an innovative online learning environment, The Academy is accessible by virtually anyone anywhere. As leaders in the field they have also developed a large alumni group leading to a large network of graduates and current students who form the basis of an unparalleled online community around the world.

Internationally acclaimed lifestyle and wealth strategist, Christopher Howard is a best-selling author, prominent speaker and the CEO and founder of The Academy of Wealth and Achievement. For almost two decades, Chris has researched the success strategies of the world's greatest business, philanthropic and spiritual minds. His extensive knowledge is shared through his books, home study courses and public seminars worldwide. As a result, Chris Howard has helped hundreds of thousands of individuals create the wealth and engineer the lifestyle they truly desire.

Update 6/8/2016: The Academy of Wealth and Achievement is out of business. Its website domain is for sale: http://www.wealthandachievement.com/ 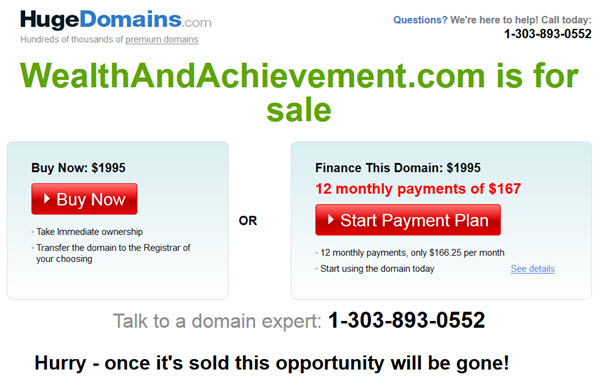 Other websites by Christopher Howard, such as listed below are also inactive: